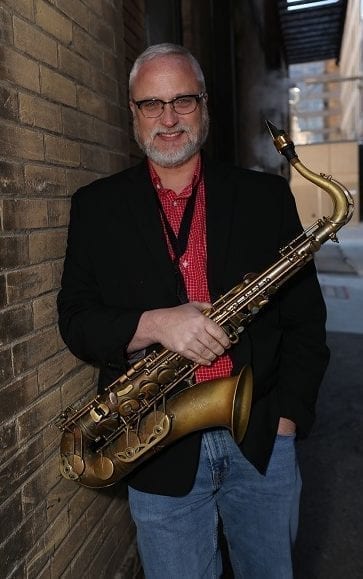 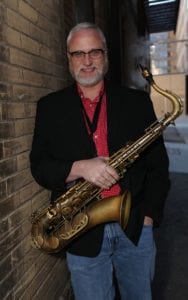 Arthur White on the GIANT Tenor 7*

“My GIANT Tenor with POWER RING setup is the best mouthpiece/ligature combination I’ve ever played on, without question. I love the depth and versatility of tone I can achieve with the setup, especially the overtones that are present. It’s amazingly and immediately responsive, in every register, and at any volume. I never thought I could achieve the sound that’s in my head, and with my new gear from JodyJazz, I’m getting closer every day”.

Dr. Arthur White is a nationally renowned saxophonist, composer, and educator and is currently serving as Assistant Professor of Music and Director of Jazz Studies at California Polytechnic State University. All About Jazz calls White’s student ensembles “solidly impressive”, while referring to his “virile tenor solos”, “scorching alto broadsides”, and his ability to “vacate(s) the podium to fashion ‘splendid’ tenor solos”. His debut album, when you find it, recorded with his band, MERGE, will be released this fall on the Artists Recording Collective label in the summer of 2019. In addition to JodyJazz Mouthpieces, he is an Endorser Artist for Andreas Eastman Saxophones,

Prior to this appointment, White was the director of jazz studies at the University of Missouri and Northeastern State (OK) University. White produced six critically acclaimed recordings by the MU Concert Jazz Band. MU jazz ensembles under Dr. White’s direction were selected to perform at the 2016 conference for the International Society for Music Education, 2012 and 2014 international conferences for the Jazz Education Network, 2011 and 2012 conferences for the International Society for Improvised Music, and the 2012 Missouri Music Educators Association conference.Dr. White also contributed an article as a research author for Teaching Music through Performance in Jazz, Vol. 2, which was published by GIA Publications in December 2015.

During his tenure at NSU, Dr. White produced five critically acclaimed CDs with the NSU Jazz Ensemble; one was named as a Blue Chip Award winner by Jazz Education Journal, signifying the recording Appointment In Milano as one of the 10 best in college jazz recordings in 2007. NSU named Dr. White as a Centurion, naming him as one of the 100 most influential people in the university’s history. He was also named the 2007 Oklahoma Jazz Educator of the Year by the Oklahoma Jazz Educators Alliance.

Dr. White has been an invited performer at conferences for the North American Saxophone Alliance, International Society for Improvised Music, Oklahoma and Missouri Music Educators Association, and Jazz Education Network. Dr. White has performed with numerous nationally acclaimed jazz and pop artists. High school and college jazz ensembles throughout the country have performed his arrangements and original compositions. White is also active as a clinician with high school and college bands, and as an adjudicator at jazz festivals, throughout the United States.

Originally from Kansas, Dr. White received the Bachelor of Arts in Music from Emporia State University, the Master of Music in Jazz Pedagogy from West Virginia University, and the Doctor of Musical Arts in Saxophone Performance from the University of North Carolina at Greensboro. Dr. White is grateful for his amazing family: his wife Megan, his son Sam, and his dogs Lily and Oakley.