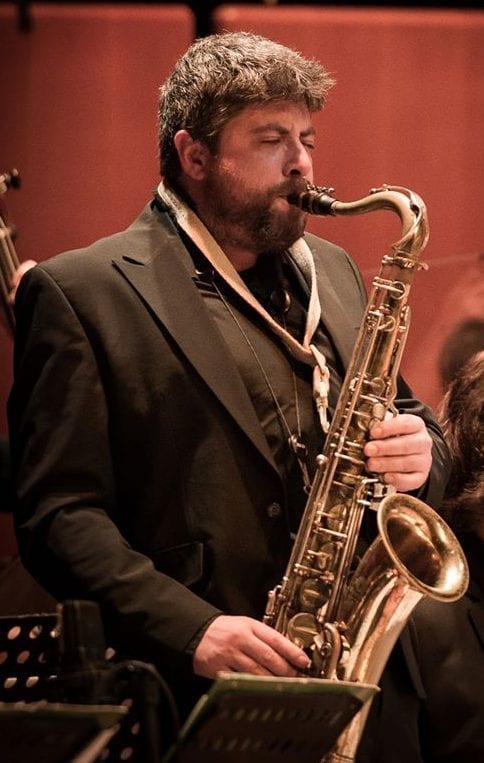 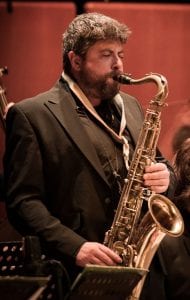 "When I play the JodyJazz HR* my problems are over. This mouthpiece allows me to always have the right sound at the right time. It’s fantastic, versatile and ease of emission puts a smile on my face every time I play!!!! I think that it's the best you can find and manufactured with the love that only a saxophonist can have. Thanks Jody !!!!!!"

Carlo Conti saxophonist was born in Rome in 1979. He took an early interest in music and started playing the saxophone at the age of 11 with Mauro Guidi; then he continues his formal education attending the Morlacchi Conservatory in the city of Perugia (Italy) with Professor Mario Raja.

In 2007, he won the second prize at Massimo Urbani Award.

During 1999, he started his journey with the band “Rossomalpelo” founded by Sergio Gaggiotti: their music can be summarized as vocal and manouche. They have performed live in the most important Italian venues and jazz clubs, and in 2010, they have played at the live concert in San Giovanni square in Rome for the Labour Day Annual Festival. So far they have released two albums, “Rossomalpelo”, and “23 con il pelo e con il vizio”.

In 2003, Carlo Conti founded the “Adamo Quartet”, together with Daniele Tittarelli, Marco Valeri and Vincenzo Florio. They performed several times at the “Casa del Jazz” in Rome during “Giovani Leoni” festival and they have rearranged some early Ornette Coleman songs with modern reinterpretation for Mindus, in Reggio Emilia.

In 2005 he set up with Tiziano Ruggeri the quintet “I Conti Ruggeri” and they have been playing in the following festivals: Festival Esperanto, Vieni in Provincia Festival, Villa Borghese Roma, Garbatella Festival Rome, Monterotondo Festival, Matera in jazz, Fara Sabina Jazz Festival; in 2006 they recorded for Philology the cd “Cabosong” proposing original hard bop songs.

He has been playing since 2005 with the jazz core band NEO. In 2010 they started a tour on the road across the USA for 50 days (6 weeks) from Chicago, where they have recorded the “Neoclassico” cd in Steve Albini’s studio, and then driving to New York, then New Orleans, Los Angeles, San Francisco and many more cities.

During the tour, he had the great opportunity of playing and measuring with the most influent musicians of the jazz core scene and American jazz, like Mike Watt and Ron Handerson.

In 2006 he has founded the “Carlo Conti trio” and he recorded a cd with George Garzone as special guest, Vincenzo Florio on double bass and Armando Sciommeri on drums. The have played at the “Viggiano Jazz Festival” in a double live concert with Roberto Gatto and at the Gaeta Jazz Festival.

Nowadays the trio is considered one of the most interesting projects in the Italian jazz scene. So far they have released two albums: “Restrizioni ingiustificate”, with George Garzone on the sax and “la Grande Beffa” (2016) with George Garzone and Pietro Lussu on the piano as special guests.

Between 2009 and 2010 he traveled to Cuba, and in the city of Havana he’s involved in several recording sessions and live shows with the Barrio San Lorenzo orchestra and the piano player Bejita, performing in the famous jazz club “Zorra el Cuervo” and recording in the legendary theater “Sono Carribe” with the Barrio San Lorenzo Orchestra and with his quintet, with Julito Padron, David Alfaro, Nestor Del Prado, Oliver Valdes, El Pollo.

In 2012 he performs for the ten encore performances of “Threepenny novel” by Bertold Brecht with Massimo Ranieri, Lina Sastri, with the orchestra directed by master Lanzillotta at the “Teatro Olimpico” in Rome, and three encore performances in the Theatre of the city of Ravenna.

In 2012 together with others very important jazz players from Rome, he starts the collective AGUS, based in the historical space “il Cantiere” in Trastevere, Rome, nowadays one of the main source of pride of the roman jazz scene.

In 2013, through the pianist Karry Luhtala, he started a new chapter in the northern European countries, creating a quartet with Stefano Nunzi bass, Valerio Vantaggio drums, Karry Luhtala piano, Carlo Conti sax they have been travelling for various tours in Finland, for four times in two years, with a very good impact on the audience and a good coverage on the national advertisings.