What Is the GIANT Tenor Saxophone Mouthpiece?

The GIANT series introduces a new concept in saxophone mouthpiece design that we call “Stealth Metal” combining the outside shape and look of a hard rubber mouthpiece with the precision of Aerospace Grade Hard Anodized Aluminum.

The GIANT has a dark, big saxophone sound but with strong projection and cut. The JodyJazz GIANT is excellent for Jazz, Straight Ahead, Bebop, Big Band, even Rock, Funk, and Blues. Due to its versatility, it can blend nicely with a concert band or saxophone quartet.

The GIANT is a great saxophone mouthpiece that seems to appeal to a very broad variety of players.

Made on our five-axis CNC mill in our factory in Savannah. The Aerospace Grade Hard Anodized Aluminum provides the perfect tone and the ability to manufacture with extremely high tolerances.

“My GIANT/POWER RING setup is the best mouthpiece/ligature combination I’ve ever played on, without …

END_OF_DOCUMENT_TOKEN_TO_BE_REPLACED

“With my JodyJazz GIANT Tenor 7*, I can definitely develop and enjoy my own sound. Everything is cle …

END_OF_DOCUMENT_TOKEN_TO_BE_REPLACED

“The range of sounds the Giant can produce is remarkable…..The response and tone were even in all …

END_OF_DOCUMENT_TOKEN_TO_BE_REPLACED
We'd love to hear your thoughts! Click here to submit your testimonial

Does Not Include a Ligature

Every JodyJazz mouthpiece is hand finished to insure the absolute best quality. In addition, each mouthpiece is individually play tested by Jody Espina or one of our professional saxophonists on staff to insure a perfect seal with the reed and proper response throughout the range of the saxophone.

What Does The GIANT Do?

How Does The GIANT Do It?

A Giant Step for Your Sound

"George Garzone is one of my favorite Sax players and in my opinion one of the greatest Tenor players of all time. He is inarguably one of the greatest living Tenor players today,” says Jody. “Larger tip openings give you more harmonics in the sound and a darker tone. The larger distance allows the reed to vibrate further, generating more harmonics. I knew these characteristics would truly lend themselves to the inherent qualities of the GIANT Tenors but larger tip openings saxophone mouthpieces are more difficult to play and require more control and practice. So I was determined to develop large tip openings to offer in the GIANT range that would be easier to play and working with George I’m proud to say we’ve more than achieved that goal.”

The main way this was accomplished was by using a facing curve that is similar to the curve on one of George Garzone’s old Hard Rubber Link 10* mouthpiece that he used to play many years ago. Essentially it is a shorter facing than you would expect on a large tip opening.

“I've been playing the JodyJazz HR* hard rubber for years and thought I would never look at another mouthpiece, but when Jody invited me to the factory to work with him on the larger tip openings for the new GIANT Tenors, I was intrigued,” said George Garzone. “Many years ago we’d worked together to develop the facing curve on my HR* Tenor 10* and we applied the same principles to the new GIANT Tenor 9* and 10*. Jody's facing curve makes these larger tip openings much easier to play. The metal mouthpiece with the hard rubber shape is the perfect mix for me. The colors in the sound of the GIANT are amazing and I love the way I can lean into it to shape my sound.”

Many people will doubt that they can play a 9* or a 10* but they are so often surprised that it does not require much more energy than their current 8* for example. We encourage you to try the Giant George Garzone Signature Model for yourself.

The JodyJazz Giant Tenor 7* was always my favorite

GIANT Tenor 7*
"The JodyJazz Giant Tenor 7* was always my favorite, but I had to experiment with the DV CHI Tenor metal and the JET eventually, just to hear and feel the differences. I currently own all three. I also played a Vandoren mouthpiece for a time. But I always came back to the Giant. Recently, I had to stop playing/practicing due to a moderately severe and long lasting bout of Covid. Just today, I had enough energy to play for about 40 minutes, which was a wonderful feeling. The night before, I had seen Jody's video about embouchure endurance, hours per week playing, and other factors as a means for Jody to help players find the right piece. Remembering his saying that his own embouchure was relaxed across the range, and the importance of the facing curve, etc...I made a slight adjustment to my own embouchure. When I did this, I literally discovered my long sought after personal sound on the Giant. It gave me the "Texas tenor" sound, great intonation across the range, the flexibility in dynamics, and I had to get accustomed to using more air through the horn. I have never been as pleased as I am with the Giant sound with my expertly and recently overhauled Yanigasawa T991. It was a huge leap, and all attributed to the Giant and to Jody's comments, teaching, and advice. I use a 3 Fibracell reed, and I am convinced I have never sounded better on any piece. I also discovered a huge improvement with the DV CHI as well, although I would have to play the Chi a few weeks in order to become totally comfortable with it. I love the spread and larger size of the Giant. I have learned through the years that Jody gives the most accurate and thoughtful advice and descriptions to customers and potential customers. Sure, he wants to sell, and he is getting into other name brands, but it would seem that customers will be able to trust his products and his advice."
-Bruce Henderson
★★★★★

GIANT Tenor 7*
"A friend of mine sold me his Giant with a number 7* tip opening. I love how easy it is to play from the bottom all the way through to the top. It's brighter than the average piece in my collection but I tend heavily towards the darker warmer toned mouthpieces. I find that with a short warmup period of a couple minutes the tones fill out and bring a sound very similar to my early Babbitt Otto Link. A difference I have found is when I push this mouthpiece hard it modulates to a sound that seems more contemporary and suitable for rock or funk. If I lay low on it I can get the breathy warmth of a ballad out of it as well. Overall this has quickly become one of my favorite mouthpieces for my tenor and is there for me when I want something that can deliver some punch."
-Peter Hawrylyshen
★★★★★

Got my sound back with JodyJazz! 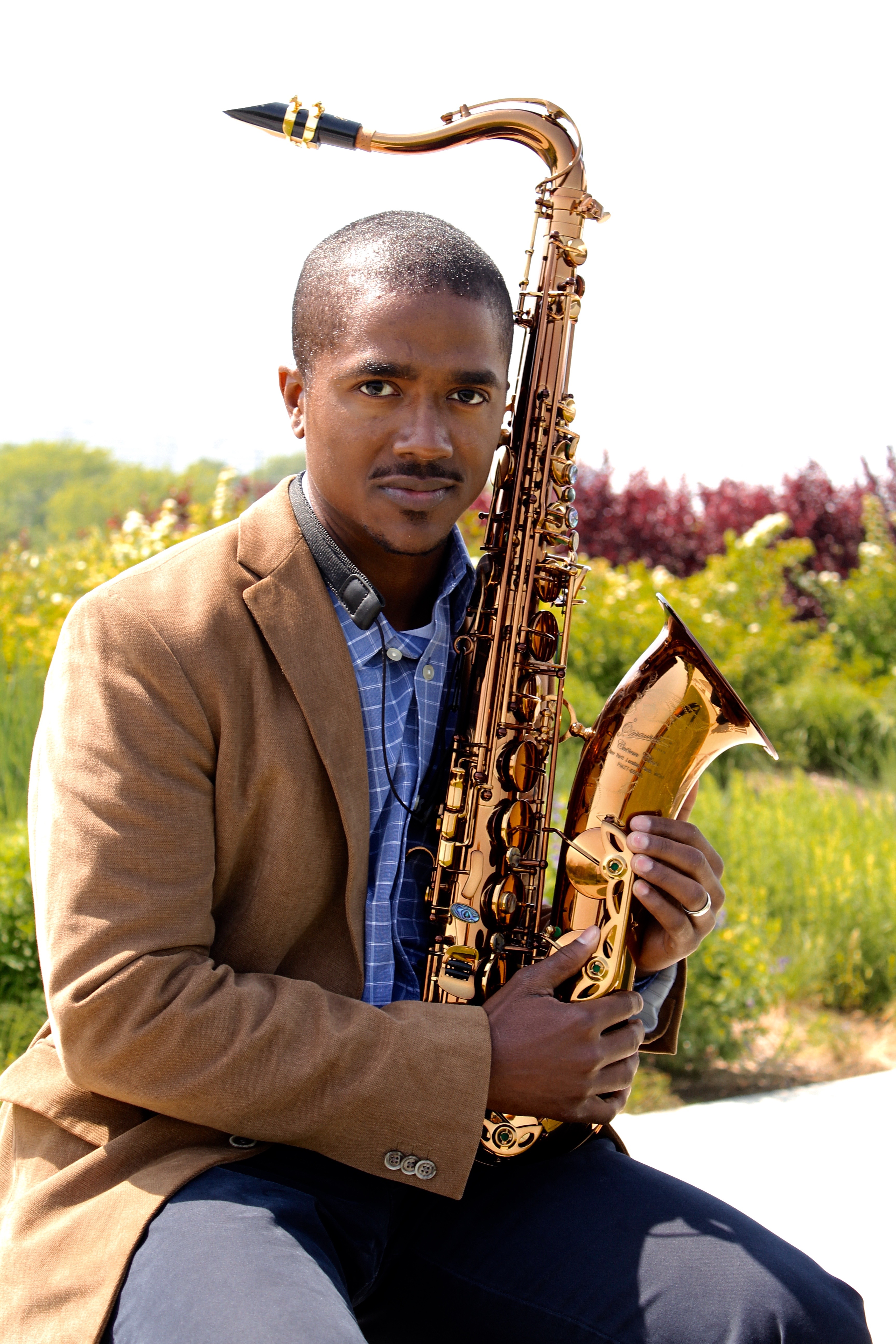 "I currently play the JodyJazz Giant 8* for tenor. For me it's the best of all worlds. It offers plenty of projection and it sits in the middle of the dark to bright spectrum. For me, all that means I can color my sound however I need to. It lets me sing out when I need to and even and cut through a loud rock band, but I can use the same piece to blend into a jazz big band sax section or play in more intimate small ensembles. I can subtone all I want and still play way up in the altissimo register with a good tone and dynamics. I've been playing JodyJazz mouthpieces since 2012. At the time I was recovering from a case of Bell's palsy -- a temporary, partial facial paralysis -- which obviously prevented me from playing my horn for a while. As muscle movement gradually returned I was determined to play again but my old mouthpieces had too much resistance for my recovering embouchure. Air would leak out of the side of my mouth because I simply didn't have the physical strength or control to deal with it. Through word-of-mouth I heard about JodyJazz and really appreciated the ethos of more free-blowing mouthpieces. I got a JodyJazz Classic Tenor #8 (which was still in production at that time) and an HR* Tenor #7*, both of which were far less resistant than what I had. I could play again! I was still far from where I wanted to be, but just the ability to make the sounds I wanted to hear kept me going and the more I played, the stronger I got. I truly believe playing accelerated my recovery and JodyJazz had a lot to do with that!"
-Darius Hampton
★★★★★

The GIANT is Superb!!

GIANT George Garzone Signature Tenor 10*
"The GIANT Tenor 10* (George Garzone model) is the freest blowing BIG mouthpiece I have ever experienced. Having played a few different 10* Otto Link’s for years and never achieving the sound or flexibility I needed in those pieces, I gave up on the big metal mouthpiece game and resigned myself to playing 8* facings. I have had much success with that set-up and felt content with my decision to switch. But after hearing some folks play the GIANT 10* online, I was interested for sure. There is so much tone and versatility in sound available from this piece that I was amazed the very first time I played it. From sultry dark sub tones all the way to bright rock-n-roll honking tenor! This mouthpiece is destined to be a classic and is versatile enough to fit into any playing situation. I encourage everyone interested in playing a big tip opening piece to try the GIANT in 9* or 10* tip openings. Great work Jody and Garzone!!!!"
-Arthur Edmaiston
★★★★★

The Giant is some of your best work yet for me

GIANT Tenor 8
"Dear Jody, I just wanna say how much I love your mouthpieces. I've been playing your mouthpieces for the last 5 years and you guys down do great work. I have both you Tenor classic, HR, and just recently the Giant. The Giant is some of your best work yet for me, its the mouthpiece I've been looking for. Thank you - William Hopkins"
-William Hopkins - Atlanta, GA