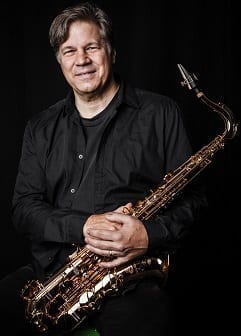 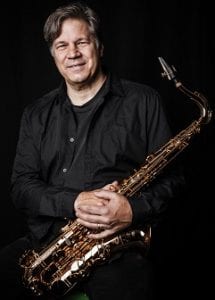 "Every so often I have gotten the itch to try a new/different mouthpiece. This usually happens when I find myself in my favorite music shop with a little too much time on my hands. Normally I try a few mouthpieces, shrug my shoulders and think "Nothing here really speaks to me, my piece plays just fine." That was the story until Jody's HR tenor mouthpiece appeared in the selection. This mouthpiece spoke to me loud, fat and clear. Not long after buying the tenor piece I replaced my alto refaced link with the JodyJazz HR* Alto and the The DV is the most expressive baritone mouthpiece I have ever had the pleasure of playing. Jody's mouthpieces are stable, in tune, allow a huge dynamic range and give me the freedom to be very expressive with my sound. Now the only reason to go to the shop is to get the horn tweaked and chat a bit."

"The HR* CUSTOM DARK Tenor is a very expressive mouthpiece. It has a lovely combination of tone colors and a dry centered feel. Played quietly it sings and is warm and fuzzy. When you put more air through it, it becomes muscular and dignified. If sound were chocolate then this mouthpiece is 100% cocoa."

Born July 31,1956 in Toronto, Canada, David Beecroft and his two brothers grew up in a home, where music has been a normal part of daily life. Under the influence of their father Bill Beecroft, a well known jazz musician (tenor and baritone saxophone, clarinet), the three children started early to learn their own instruments. David Beecroft’s older brother for example began playing the trombone and is now leading one of Toronto’s most successful GALA Orchestras as well as playing in many various Jazz groups around the city.
Being raised in that environment David Beecroft’s music career started at the age of 9, when he began taking piano lessons but already by the age of 12 he had fallen in love with the tenor saxophone, (his fathers horn), and decided to follow in his fathers footsteps.
His early musical education consisted mostly of imitating the saxophone greats of his fathers record collection and listening to many of Toronto’s greatest players that regularly rehearsed in their home. Often he was allowed to hear his father playing on weekends in the local jazz clubs and later to allowed to “sit in” at his fathers jam sessions under the care of such Toronto jazz legends as Norm Amadio and Jim Galloway.
As early as junior high school he was playing in a few neighborhood jazz groups. Because of this, his parents realized that he required a musically enriched education and so he was sent to a senior highschool that had an extensive music program. David Beecroft played in the school Big Band, concert band and founded his own sextet at the age of 17.

1974 he received the “Most Outstanding Player” award playing saxophone in in the highschool big band at a Canada wide Jazz competition. At this time he began to study flute to extend his musical possibilities.

1975 he secured his first steady engagement for over 1 year with his David Beecroft Quartet the Red Lion club in Toronto. In addition to that he played in many different jazz groups in Toronto and all across Canada.

1979 he was invited to Amsterdam, Holland, to play with very good local jazz musicians including Sandy Moss, (saxophone – Woody Herman big band), Erv Rocklin, (piano – Chet Baker, Lenny Bruce, Dexter Gordon), John Clayton, (bass – Count Basie, Monty Alexander), Wilbur Little, (bass – Elvin Jones, George Coleman), Adrie Braat, (bass – Dutch Swing College Band) In Amsterdam it was the first time he was recorded with famous musicians like John Clayton, Toots Thielmans and gave a memorial concert to Charlie Parker and a tribute to Ernie Wilkens for Dutch radio.
1981 David Beecroft returned to Toronto to play with the Bill Beecroft Dance Band (Gala Orchestra) and to continue his collaboration with Canadian jazz musicians. Three years later he began to play the soprano and alto saxophones which made it possible to play in more varied professional situations, including classical orchestras, theatre, musicals and shows. All of those musical influences helped him to enlarge his musical flexibility.

1991 invited to play at the Dumaurier International Jazz Festival and the Beaches International Jazz Festival. At this time he began composing his own music and playing it with his “David Beecroft Quartet”.
1991/94 joined the Norman Marshal Vileneuve Sextet and also worked with various players including Don Thompson, Bob Mover, Niel Swenson, Lorne Lofski, Moe Kaufman, Guido Basso, Rob McConnel, Pat LaBarbara, and others.

1992 he went to San Diego, California, to play with Chris Connor in his 7 piece jazz band 1994 he began playing with jazz vocalist Chris Bennett with whom he continues to play with until today.

1994 At this time he moved to Berlin and has since become one of the most well known jazz musicians in the city.

1997 has been a regular at the Tiergarten Festival

1995/99 he played as a guest soloist in the orchestra of the “Drei Groschen Oper” at the Deutches Theater. Since 1995 he has often been a guest of the Chameleon Cabaret as well as a substitute player with the RIAS orchestra (ZDF). He has played in all the big jazz clubs in Berlin like the A-Train, Schlot, Quasimodo, French Quarter, Badisher Hof etc. and for special concerts in churches or at the “Lapidarium”, or in museums and galleries. Since 1998 has been playing and touring for Jazz Radio Berlin. Recent tours include playing for MCM at the Mode-Messe in Dusseldorf and other big events through Germany.

2000 Began producing and engineering recordings for artists including Georgio Crobu, Ekkehard Wölk, Pepe Berns, Wolfgang Köhler, “Night Train” and many others. He has also began a project making documentary recordings of jazz musicians in Berlin in co-operation with Jazzagentur Berlin.
Completed his saxophone improvisation method book “Sound, Modality & Movement” which he currently uses for teaching at the Jazzschule Berlin.

Concerts with new group: "That 2 Tenor Thang" with Bernhard Ullrich.