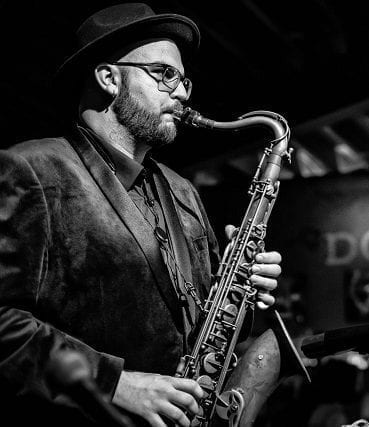 "I have been using JodyJazz mouthpieces for the past 3 years. Since then, I have been complimented more than ever about how centered my sound is, especially by engineers in the recording studio. Imagine a world where most every reed is playable. With JodyJazz, that has been my experience. JodyJazz is the new standard of mouthpiece making and I have yet to play on anything that I would even consider in the ballpark of these pieces.

Thank you Jody for your contributions to saxophone and making these pieces that have enabled me to find my sound. "

Meet Mark Hartsuch, the 26 year-old, Los Angeles based saxophonist and producer who is taking the world by storm.

After graduating from UNT, Mark quickly became an in-demand saxophonist, performing up to five nights a week across the country, and internationally.

Mark is most well known as a founding member of “Dallas Horns” a 3-piece horn section that specializes in tight, funky horn lines. Mark has served as one of the primary composers and arrangers for the group, arranging all but one song on their 2016 album release “Christmas” and composing all of the compositions on their upcoming record “Get a Job!”

Beginning in 2018, Dallas Horns has had the immense pleasure of serving as the horn section for Grammy and Oscar award-winning artist, AR Rahman, in his live performances “AR Rahman Live.” Most recently, the group traveled to Doha, Qatar to perform at the Khalifa International Stadium for over 30,000 people. That performance was the first and only performance held prior to the upcoming 2022 FIFA World Cup.

Mark’s current focus is sharing the joy of saxophone through education and performance.

Mark is an Ochres Saxophone endorsing artist and licensed dealer.