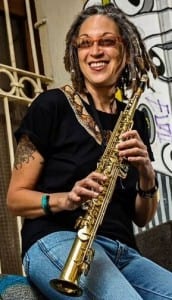 "The DV gives me everything I need in a mouthpiece--1. Beautiful and consistent tone throughout the horn at any dynamic 2. Power 3. Ease of playing.

As a colleague of Jody’s for many years, I can attest not only to his skill and knowledge as a player, but also to his dedication to the art of the woodwind mouthpiece. I look forward to trying any mouthpiece that he invents."

"Each concert is a shamanic journey–a tightrope walk between Control and Abandon." –ST

Su Terry has been hailed as a "Superwoman of Jazz" (Hartford Courant) and a "forward voice in modern music" (Saxophone Journal). She received the Hartt School's first degree ever awarded in Jazz Performance, and in 2001 was named Alumna of the Year. She recorded under the name “Sweet Sue Terry” until 2014, when her professional name became, simply, Su Terry.

International jazz festival appearances include Montreux, Grande Parade du Jazz, Pori, Northsea, Montreal, Quito, Trave, Ottawa. She has appeared at clubs throughout North and South America, Europe and Japan. In the States she’s performed everywhere from Carnegie Hall in New York to the Playboy Jazz Festival at the Hollywood Bowl.

Ms. Terry's discography includes several recordings as a leader and co-leader. She is a guest soloist on dozens of other recordings. Passionate about passing on her knowledge to students and colleagues, she conducts frequent masterclasses and workshops. She is the author of Practice Like The Pros and three other instructional books. She is the author of two non-fiction books: Inside the Mind of a Musician and For The Curious, and an illustrated novel, I Was a Jazz Musician for the FBI. Ms. Terry is the lead columnist for The Note. She has been Artist in Residence at the Jazz Society of Ecuador since 2012, and in July 2013 her group toured that country for the U.S. Dept. of State. She currently plays with the Ecuadorian jazz quartet Jazz de Barro, and is on the faculty of Taller Encuentro de Músicos en el Jazz.

Ms. Terry is a longtime practitioner of the martial art of Taijiquan and holds nine USKSF championship tournament gold medals.

More information can be found at www.suterry.com; the books Reed All About It by Bob Bernotas, Madame Jazz by Leslie Gourse; Experiencing Jazz by Michael Stephans, Penguin Guide to Jazz on CD, All Music Guide to Jazz, Wikipedia, YouTube and other online media.

She lives on a country lane in the Andes Mountains of Ecuador with her husband, writer Johnny Jara Jaramillo, and their dogs and cats.

Su Terry is a Yamaha Saxophone Artist. She plays JodyJazz mouthpieces and ligatures, and Légère reeds.

“One should almost say that this young lady is born for her instrument. That relaxed, exalted playing! That rhythmic feeling! That improvisational skill! Simply extraordinary!” –Die Wahrheit, Berlin, Germany

"Both as a composer and a performer, with her own unique tone, Su Terry continues to make great contributions to the world of jazz." –Reese Urlich, Jazz Perspectives, National Public Radio

“She has a formidable musical intelligence. . .” –Penguin Guide to Jazz on CD

"Su Terry is a remarkable storyteller, in music and in words. . . she looks at the world in a creative--we could say cockeyed--wonderful way." –Erika Funke, ArtScene, National Public Radio