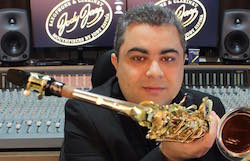 “It is a very balanced mouthpiece and very easy to play, It has a Strong, Live, Powerful and Harmonic sound. Now I can play in the edge of the Alto Saxophone. It is possible to use it even Jazz or Pop with the same easiness. I am very happy with the results I achieved with this precious jewelry, It was the perfect matching.”

“An extremely versatile mouthpiece, very easy to play, a mix of jazzy and pop sound that I have been looking for in a mouthpiece that has a big, alive, strong and harmonic sound and now I found it. I’m very happy with these sound characteristics it gave me in my tenor saxophone, finally found the ideal combination.”

“It could give me a sweet sound and at the same time a clear and alive sound also. It’s a very easy mouthpiece to play, comfortable, very precise tuning and a beautiful sound. A long time ago I have been looking for a mouthpiece with that comfort. I am very happy with the result.”

“An essential piece for those looking for versatility in playing baritone saxophone, even to play as a soloist or Big Band. A very great easiness in playing since the bass to loud notes. It can brings a classic and pop sound, depending of what sound you want in that moment. It turned my baritone sax in a real cannon sound. I am very very happy with this true masterpiece.”

Amedício Jerome de Souza Junior was born on July 22, 1980, in Salgueiro city at Pernambuco state of Brazil. He joined the music when he was 16 years old playing the trombone, then trumpet, until reaching the instrument by which truly fell in love: the saxophone. Nowadays he is considered one of the greatest talents of instrumental music of the North and Northeast of Brazil.

He decided to study music at the instigation of his paternal grandmother and by listening so much the frevo, maracatu and caboclinho, that are traditional songs and rhythms from North and Northeast of Brazil.

Besides musician, Amedício jr is also a recording and mixing engineer, music producer and arranger.

Over the years, he has been working with various bands and artists, playing, producing, mixing, recording and making arrangements, for the bands and artists such as Limão com Mel, Gatinha Manhosa, Mastruz com Leite, Batista Lima, Beth Birth, Vicente Nery and Dorgival Dantas.

Amedício Jr is considered a versatile, bold and innovative saxophonist and arranger, with his usual unexpected sight when making music.

During his musical career, he recorded two instrumental albums. The first album from Amedício Jr. is a collection of the biggest hits of the band Limão com Mel. In his second instrumental album, the theme was Flash Back, playing great classics hits of international music. And soon, he will be recording his third CD with own music copyright.