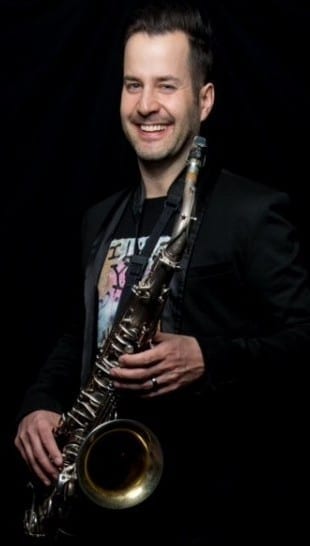 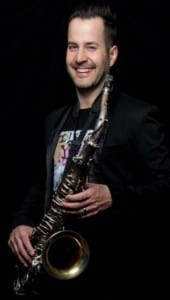 “The tone through each one of my saxophones starts by entering one of Jody’s fabulous mouthpieces. With a variety of styles, and materials, I’m confident that there is a mouthpiece in his catalogue to be paired with any saxophonist’s horn. All of my JodyJazz mouthpieces are free blowing, and beautifully hand crafted. My main sax is the tenor. From the first time playing it, I loved the DV Tenor 7*. My sound was warmer, but could project louder AND speak softer. Articulations were easier to pronounce, and my altissimo notes grew in range and beauty. Curious, I tried the DV CHI Tenor 7*, and loved it as well. I play on this as my main piece, and it pairs nicely with my silver Selmer horn.

In 2014, I played tenor and baritone sax with Canadian singing icon Gino Vannelli. This was the first time that I played the bari sax, and it wasn’t easy until I picked up a DV Baritone 8 mouthpiece. The DV made it easy to blow a beautiful tone through the sax, while I only needed to focus on the music.

One of the trickier saxes; the soprano, needs a lot of focus and dedication to hone a personalized tone, with good intonation. When I switched from a reputable manufacturer, to the DV Soprano 7*, I was able to work on my sound, instead of fighting with the technical difficulties the soprano sax. This mouthpiece darkened the tones and made the instrument less ‘nasal’, and super fun to play.

I seldom play the alto, but when I do, I can ease into it with a DV Alto 7 mouthpiece. Switching between the different JodyJazz mouthpieces is easy and comfortable. Thank you Mr. Espina, and your fantastic staff for your contributions to the saxophone community!”

Carson Freeman has developed a unique, sought after style that has launched him into the performance spotlight. Heralded as the 2010 Canadian Smooth Jazz Wind Instrumentalist of the Year, Freeman was also awarded opportunities that showcased his musical art alongside Grammy Award Winners; David Sanborn, M.C. Hammer, (Guitarist/Producer) Paul Brown, Guitarist Larry Carlton and Jazz Singer/Pianist Diana Krall. As well, Carson has performed with several other notable musicians, has appeared numerous times on (Canadian) national television, performed for Canadian Prime Minister Stephen Harper, and has entertained notable international celebrities including Sarah Jessica Parker and Catherine Zeta Jones. Other passions include a love of cooking that lead Carson to appear on the Canadian Reality TV show “Come Dine With Me Canada” (CDWMC). Carson was featured in five episodes of the first season and won first place for his hosting and cooking skills. After his CDWMC experience, Carson received opportunities to cook in front of live audiences to teach easy cooking methods that inspire healthy delicious affordable meals. Carson has lent his musical talents to several recordings, and is in the process of recording his debut album. Carson resides in the Mississauga Ontario suburb; Port Credit with his (Opera singer) wife Abigail, cat Kali, and dog Brecker.