What Is the DV Alto Saxophone Mouthpiece?

Jody Espina has introduced the concept of Golden Section Proportions to the art of high end saxophone mouthpiece design. The DV Alto Saxophone Mouthpiece has a perfect chamber/bore/facing combination will result in an extraordinary playing experience for you.

Here, nature, science and imagination combine to create a revolutionary new saxophone mouthpiece. Jody Espina has designed the JodyJazz DV (U.S. Patent No. 7,470,844) using proportions and principles found in nature. For the most effortless playing experience of your life, we invite you to try the DV.

Three Goals in Creating the DV Series of Saxophone Mouthpieces

END_OF_DOCUMENT_TOKEN_TO_BE_REPLACED

“I need my mouthpieces to play in tune, play easily, have a big sound with overtones, and play in wh …

END_OF_DOCUMENT_TOKEN_TO_BE_REPLACED

“My JodyJazz mouthpiece has made my sound more gorgeous than before. It makes it easy to control and …

END_OF_DOCUMENT_TOKEN_TO_BE_REPLACED
We'd love to hear your thoughts! Click here to submit your testimonial

“… the most inspiring were the DV alto mouthpieces. Bright, full of harmonics and brassy without b …

END_OF_DOCUMENT_TOKEN_TO_BE_REPLACED 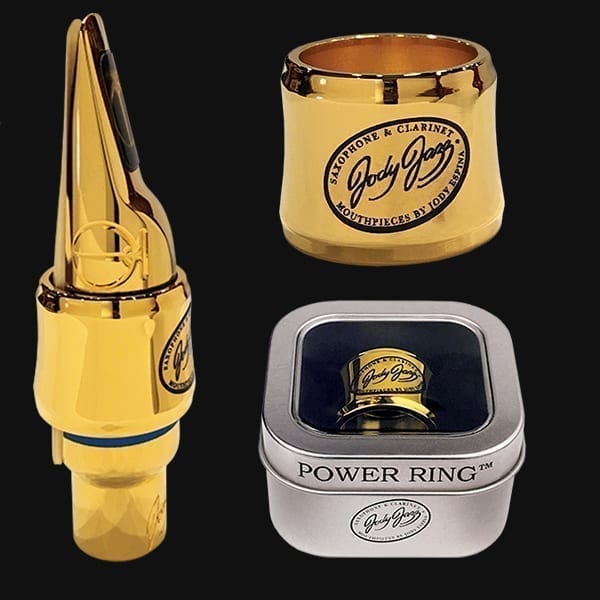 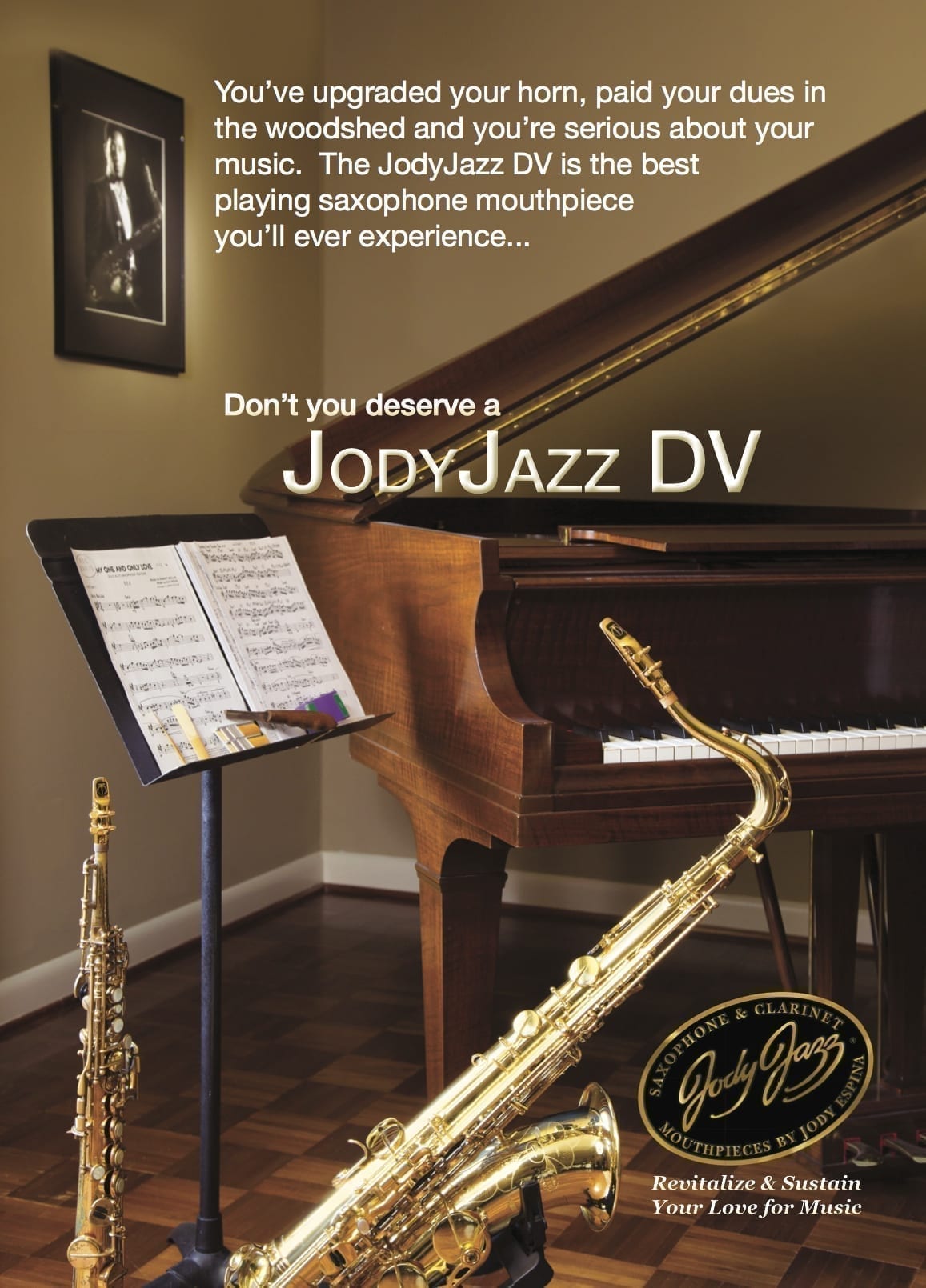 The new facing curve results in absolutely no dead spots in the vibration of the reed. In other words, all notes in all ranges respond equally. This alto sax mouthpiece has a husky barrel-chested tone while being able to sing and soar over the top of any band. Sub toning and low notes are extremely easy and the altissimo is out of this world. Intonation is spot on. Be prepared to have possibly the most fun you ever have had on the saxophone.

Players who now or in the past have played Guardala, Dukoff, Beechler, Jumbo Java, SR Tech, Vandoren V16, Yanigisawa, or any of the bright mouthpieces out there will be sure to love The DV. This is not just another bright mouthpiece. There will be noticeable differences and improvements.

I have found that many straight ahead jazz players who tend to favor mouthpieces that are just a little brighter than most mainstream dark mouthpieces have a very high chance of making the DV their new alto mouthpiece. We have had many, many converts who came from playing the most popular hard rubber Jazz piece. These players almost always think that they won’t like a metal alto mouthpiece and they are surprised every time.

All saxophone players are amazed to find a saxophone mouthpiece that works so efficiently, where the articulation is clean and one can easily go from low to high and vice versa.

The DV is manufactured on the most sophisticated computer controlled Lathes and Mills, yet the DV benefits from a high degree of hand finishing. The attention to detail in design and finishing given to the DV results in a stunning work of art that plays like a dream come true.

What Does The DV Do?

How Does The DV Do It?

DV vs DV NY (How are they different?)

Both mouthpieces have a full resonant sound due to the secondary window. The DV will have more projection and be brighter due to the raised floor of the chamber while the DV NY will have a more traditional Jazz sound and projection due to the deep full chamber. We often recommend trying both mouthpieces if you are not sure which model would suit you. 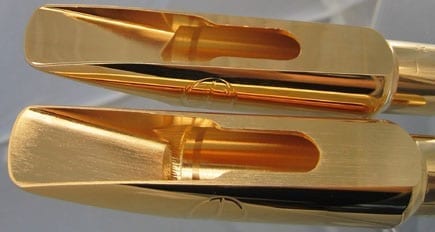 Due to the free blowing nature of the DV alto and all the DV's , be prepared to use a harder reed than you normally do. This may or may not be the case for you. The great benefit of this is that a harder reed lasts longer and a harder reed helps the altissimo range. For this same reason, you may want to try a slightly more open tip than normal. For example, Meyer 6 players, will usually play a DV Alto 7.

Why is there a warning label on Metal Mouthpieces?
Almost all metal mouthpieces in the past and at the present time are made out of brass which can contain up to 3% lead. The lead in the brass is one of the components that give this particular brass it ’s hardness or rather it’s softness which makes it have a particularly pleasing sound to musicians. Proposition 65 from the state of California requires manufactures to label any products that have compounds in them that have been found to cause Cancer or Reproductive Harm. Lead is one of these Compounds. JodyJazz mouthpieces are electroplated with a layer of copper, then a layer of Nickel, Silver or Rhodium, and then a layer of Gold or Silver. This electroplating ensures that the raw brass is never in contact with the player.
Do you and your employees use brass mouthpieces?
This is Jody Espina and yes myself and my employees have been using JodyJazz Gold or Silver Plated brass mouthpieces for many years. My first JodyJazz brass mouthpiece was made in 2001 and I have continuously been playing JodyJazz brass mouthpieces since. I played my first metal mouthpiece in 1979 on tenor sax and have always used a brass mouthpiece on tenor sax ever since then.
Did the Jazz greats use these kind of brass mouthpieces?
Yes. Ben Webster, Coleman Hawkins Stan Getz, Sonny Rollins, Dexter Gordon, John Coltrane, Michael Brecker, Tom Scott Andy Snitzer are just a few of the 1000’s and 1000’s of players who have played brass mouthpieces.
Customer Reviews
★★★★★

I can't believe what I was missing without this mouthpiece.

DV Alto 7
"My first reaction to playing the DV was that I couldn't believe how full it sounded for being a metal mouthpiece! Up until now I had always associated metal mouthpieces with being harsh and shrill, but that is not the case with the DV. It has the perfect balance of lushness and edge to allow me to play a wide variety of music. I find myself playing mostly rock nowadays and the DV has given me the extra horsepower to really cut without sacrificing my tone. It is worth every penny! Jody and his team were amazing with setting up a trial for me and I can't recommend enough that others set one up if they aren't sure what to purchase. Jody was not kidding in his YouTube videos; you really have to play the DV yourself to believe it!"
-Andrew R.
★★★★★

DV Alto 6
"I'm a relatively novice player, even though I've been playing for 5 years. I saw Jody on the McGill School video and decided to upgrade my mouthpiece. After filling out the "6 Questions" and exchanging a series of emails and phone calls with Jody and his staff. I picked out two hard rubber mouthpieces. They played great but then I decided to try out the DV. I had long conversations with various members of Jody's staff. They were professional, knowledgeable, and extremely patient with me, answering every question. The DV is a phenomenal mouthpiece. Even with my mediocre playing, the sound is so much better and it is so much easier to play the DV than any other mouthpiece I've tried. And did I mention that it is a beautiful piece of art. The DV is great but the thing that really sold me was the great support I got from the JodyJazz team. I highly recommend them to any player, amateur or professional."
-Jacob Pankowski
★★★★★

It's not a mouthpiece it's masterpiece

DV Alto
"Dear Jody, it's not a mouthpiece it's masterpiece and should find it's place in the history of music. Thank you very much for your efforts in creating such marvelous piece of art."
-Sebastian
★★★★★

DV Alto, DV Alto 8
"Mr. Espina, Congratulations on your company’s 20th anniversary. Old-school personal customer service meets the computer age. Mouthpieces need to be compared and you make that EASY, three at a time. My repair guy recommended you, so I went online and heard Jay Metcalf compare five of your pieces from the dark HR*, the free-blowing DV, to the bright Super Jet. Dude can play. I also see that Tom Scott is now playing DVs on his alto and soprano, and Super Jet on tenor. Freakin’ Tom Scott! I have played your HR*, DV, and Super Jet. It is amazing how different they all are. The HR* is perfect for a student upgrade or pros specializing in longhair. It has a dark controlled classical sound. I could have used this back in college. The DV is a hardbop Big Dog. It sounds like Cannonball with enough power to blow with the big band trumpet guys. The Super Jet is a heavy metal bebop cannon. When the guitar player turns it up to 11, the Super Jet will still cut like a laser. I prefer the DV 8 on alto. The real reason for my letter is to give props to your Accounts Manager, Danielle Walker. After I submitted your “6 questions” online, Danielle promptly responded with a recommendation for my needs. When I called her, she continued to offer her valued opinions about your lineup. She made the whole process easy, and very personable. I wanted to try a few different lays of DV and Super Jet. Your 3-week return policy allows for the process. Easy. Amazing to do business from Georgia to California. My VI tenor restoration will be done, 12 November. And my Berg 110/2 is not responsive and cannot compete with your lineup. So, I will again call Danielle to upgrade my tenor sound. Continued success." Paul R Pettit Fair Oaks, CA
-Paul R Pettit
★★★★★

Still can't believe I am playing a metal MPC on an alto!

DV Alto 8, JET Tenor 8
"Jody, Just wanted to shoot you an email to let you know how thrilled I am with the mouthpieces I purchased from you in Savannah at the GMEA convention. I purchased the Alto DV8 and I am still baffled at how a metal mouthpiece can be so free blowing, offer so much color, character and fatness to my tone, yet provide the projection I need. Still can't believe I am playing a metal MPC on an alto! The Tenor JET 8 has the character of tone of my old Link, yet the bite of my Ponzol. A perfect marriage of the two! Thanks again for taking time with me. I have some friends that will be at TMEA and I told them to go by your booth and check your mouthpieces out. Best Wishes! Joe "
-Joe Heiberger