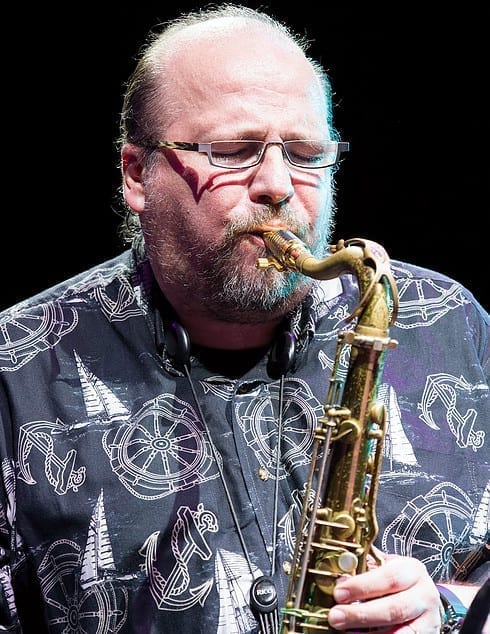 "I have used many mouthpieces throughout my career. For me, the JodyJazz mouthpieces are simply the best. Jody has developed a variety of metal and rubber mouthpieces. They are flexible and play beautifully. I play the DV model. It is terrific because I need to go from Stan Getz to King Curtis at the drop of a hat. The flexibility of a DV is majestic. When I am in the mood to play darker, more traditional jazz, I use his NY model on records. He also created a Chicago type that is in between the two. I use the DV on soprano, alto, tenor, and baritone. Jody is a great saxophonist, a true scientist, and one of the nicest people in the business. You can contact him at jody@jodyjazz.com. www.jodyjazz.com. Once people play his mouthpieces, they are hooked."

"The difference between your mouthpieces and the rest is staggering. There is an amount of energy, clarity, and power that is possible with your mouthpieces that I have not been able to produce with any other setups. And most importantly, those qualities are consistent throughout the saxophone family. Thanks for everything."

"Jody's “Ring” ligature affords me greater agility on an already versatile mouthpiece. The tonal center feels more focused and the instrument plays freer and even more responsively throughout the low and altissimo ranges"

Miami's Ed Calle has been dazzling audiences with his bountiful musical gifts for about a quarter of a century. From the start, it was obvious that he was a natural player and now, at 39, Calle has been heard on thousands of recordings both as a sideman and a soloist, and his resume includes tour dates with some of the biggest names in the business.

Even if Calle's name is unfamiliar to you, it is guaranteed that you have heard his music. His fiery tenor has graced the work of Gloria Estefan from the earliest days of the Miami Sound Machine, and he's heard on Grammy-award-winning recordings by Arturo Sandoval, Vicky Carr and pop singer Jon Secada. You have also heard him with Julio Iglesias, Vanessa Williams, Bob James, Frank Sinatra and many others, as well as on television and in motion picture soundtracks. The man is not only gifted, but versatile whether it be rock, jazz or pop. Calle has done it all and done it well.

His passion, however, is jazz, an affection he discovered upon hearing a Michael Brecker recording back in his teen years as a student at the University of Miami. Since then he has never looked back. Born in Caracas of Spanish parents, the Latin connection is also a part of his sound, an ingredient that adds just the right touch of spice for his latest solo recording, Sunset Harbor (CCD-4856-2), on the Concord Vista label. The fourth recording under his own name, Calle is proud of the finished product that bears his trademarks of rich melodies and great harmony.

Even before he left the University of Miami, Calle had already hooked up with Gloria Estefan and the Miami Sound Machine, and also with Julio Iglesias. "After college, I went on tour with Bob James, Julio, and Gloria all at the same time." Calle was with Estefan before she hit the big time and he learned first hand what it was like to be a part of a group that took off like a rocket. "I see a little bit of that same good fortune starting to happen with me," he noted. "We perform around the world with my own band, and I can see a similar positive reaction from the crowd happening with us."

Second to a passion for music is a passion for mathematics. Besides his master's degree in jazz performance, Calle also has a bachelor's degree in math from Florida International University. "I've studied jazz and harmony from a mathematical perspective," he said. "And there is a strong connection between music and math. I'm convinced that most of the great figures in math history were also musicians, because the same guys who gave us geometry also gave us the modes. But even though the same part of the brain is dedicated to both math and music, I still know a lot of guys who are lousy in math but really great musicians. They probably just had bad teachers."

Ed Calle strives to be both an artist and an entertainer. "As a person, I'm very light-hearted. I'm not the musician who wears the artsy shirt or whose house is painted black. I'm pretty average-except when there's a saxophone in my face. Then I become something else. When I'm eight or twelve bars into what I'm doing, the artist in me takes over. When I'm in that zone, you could slap me in the face and I wouldn't even realize it. I'm only thinking about the music."