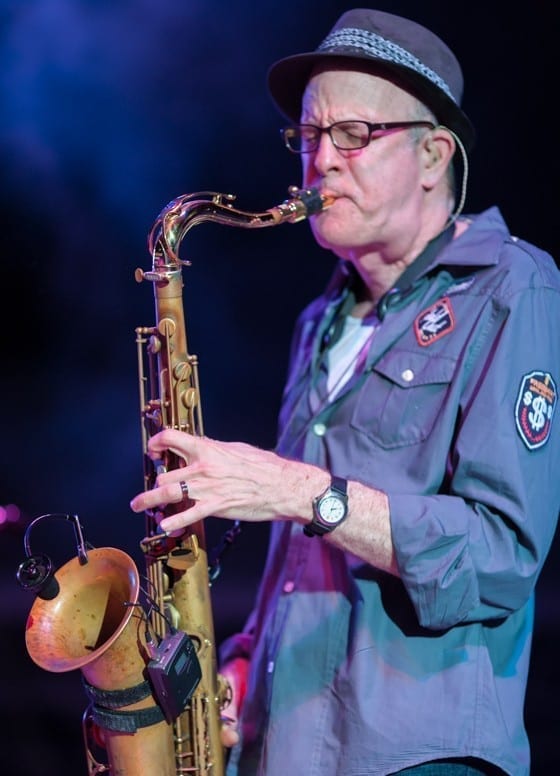 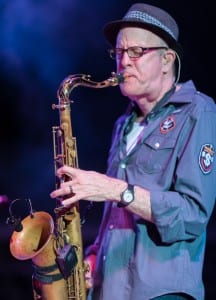 "I'm not really a mouthpiece guy. I had played on the same mouthpieces for years, and wasn't one of those cats constantly experimenting with different pieces, but I had a couple of friends, whose opinions I respected, tell me about Jody's mouthpieces. I tried them and was immediately a convert.

I'm using the DV on alto and tenor and I've never been happier. They give me the freedom I'm looking for, and reed problems are a thing of the past. It enables me to effortlessly produce the sound that I'm hearing in my head, and that's what I want from a mouthpiece. "

It seems as if the more popular something becomes, the less 'realness' and grit there is left to it. This especially holds true with music. Once you scratch below the surface, it becomes quickly apparent that the best and the coolest stuff is unlikely to be found on the charts or on TV, but rather in hip underground clubs, where one discovers players blowing up a storm with fellow heavyweights. Saxophonist Fred 'Freddy V' Vigdor is one such player. His accomplished, but essentially fiery and rootsy, playing has long been regarded as the 'real deal'. Yes, his technique is top drawer, his jazz chops impressive, but it's the relentlessly 'down home' feel, and the full-blooded tone, which has long marked him out as both a crowd pleaser and a musician’s musician.

I grew up playing in R&B bands in high school," Freddy remembers. He laughs, "I was always the only white guy in the group." He continues, "Tom Scott and David Sanborn were the first sax players I was into, their playing really spoke to me and it was through them that I went back and listened to Cannonball Adderley and Charlie Parker. It seems like I've worked my way backwards. I got into John Coltrane through my love of Michael Brecker’s playing: The first time I heard the Coltrane's Sound record, I thought, 'That's where Brecker gets his stuff from.' I've always taken inspiration from the people I grew up listening to. All of that ends up in my music, somehow."

Living close to New York City gave Fred the opportunity to hear the music firsthand, up close. "When I got out of high school I started studying with Lou "Blue Lou" Marini. Lou was a member of the original Saturday Night Live house band and a very in-demand session player. I used to go into the city and Lou would take me around to his record dates or live gigs and introduce me to all the cats. All the guys whose names I'd seen on records: Sanborn, Brecker, Will Lee, Steve Gadd, Richard Tee, they were still doing gigs in tiny clubs to let off steam after working all day in the studios, and that gave me the chance to see them really let loose. I spent a lot of time in those clubs, just soaking it all in. When you hear the be-bop guys talk about seeing Bird and Diz on 52nd St, well that's what this was like for me."

Working the road as a youngster playing as a sideman to Matt "Guitar" Murphy (James Cotton, Muddy Waters, Blues Brothers), Fred learned consistency and professionalism. "It didn’t matter if it was a crappy PA, or if you were under the weather, or the crowd just wasn’t into it. Playing with Matt, you had to be able to match his energy onstage every night or you’d get left in the dust”

Fred then continued his apprenticeship in the NYC clubs and the soul, jazz and blues circuit, working both as a sideman to touring stars and also blowing out front with small combos. His growing reputation led to his (now long standing) relationship with keyboardist/producer Bob Baldwin, and Freddy became Bobby's main horn man, both on record and on the road. When Average White Band’s original saxophonist, Roger Ball, quit the (heavily touring) band to spend more time at home, it was Freddy V who he recommended as a replacement. Thus began Fred's decade long membership with the seminal r&b unit which continues to this day. Fred's role as AWB’s up-front soloist, supporting keyboardist and horn arranger has seen him touring clubs, theatres and festivals all over the world. This heavy workload permitting, Fred still found time for jamming, guesting or leading groups of fellow top drawer musicians in the best jazz and soul clubs in NYC, Atlanta (where he now resides) and, even, London where Fred's very occasional British 'pick up' bands attracted players of the quality of Jason Rebello, Jim Mullen and Ash Soan, to name but a few.

In 2004, Fred was asked to take over the saxophone duties with vocalist Michael McDonald on the “Rock & Soul Revue” Tour. The vocal legend was so pleased with Freddy's work that he asked him to play on his Motown II collection. Always a capable writer - Fred's tunes have been recorded by not only AWB but also the likes of Grover Washington Jr, Marion Meadows and more - the solo album idea was prompted not only by Fred's club experiences, jamming with like minded musicians, but also the public at large. "People kept asking me, 'When are you going to put out your own thing?' I never set out to be the upfront guy – it took me nine years to get started on the project. I had some false starts with different guys, but once I started working with Mo, I knew we were on to something."

Mo is Mo Pleasure, another soul man with an impressive pedigree - musical director for Earth, Wind & Fire; keyboardist for Janet Jackson, Maxwell, Roberta Flack and others. "Before Mo and I even met, I had seen him playing guitar for Ray Charles. Then we wound up together on some gigs in the small clubs around New York, with Mo playing keyboards and sometimes bass. We really hit it off musically, but Mo moved to LA and I went on the road with AWB, so we didn’t see each other for years. He then moved to Atlanta, and when I ended up there too, we started writing together.”
With Mo's arrangement and production assistance, things fell into place. “We would get together on our time off from our road gigs and it slowly started turn into something really cool. He played bass and keys on most of the initial tracks, much of which we kept because the feel was just so good. It's all live musicians playing real instruments – no sequencing. To know that we could pull this off…well, it was enormous for me."
The bulk of the recording was done at Pleasure Island, Mo's Atlanta studio, but not everyone made the trip down South. "The Internet is a wonderful thing. We were able to collaborate with some great musicians from London to New York to San Francisco. We got some folks with incredible resumés," Freddy says proudly. "The guys on this album have played with Prince, Tower of Power, George Duke, Dave Sanborn and more…I'm thrilled to have them involved in this project."

'Easier Than It Looks' may have been a long time in the making but is a debut record that truly reflects Fred's long-standing pedigree as a heavyweight player at the top of his game. It unashamedly nods to the traditions of those 'back in the day' players that have influenced, and continue to influence, Fred's sound. The album also shifts effortless through the gears, encompassing rootsy blues, exciting and powerful jazz/funk, shimmering melodic soul and more. Every note is carved from marble and, alongside the undoubted sophistication of the production values, it still retains that essential never-to-be-beaten feel of a great ensemble, playing great tunes, with great joy and affection, in a suitably atmospheric club venue. “I’m really proud of the album,” he concludes. “I made a record that I would want to hear and it’s a snapshot of what I’ve been inspired by. It’s my way of passing it on.”

Freddy V’s debut CD “Easier Than It Looks” is available at freddyvmusic.com , www.cdbaby.com and digstation.com