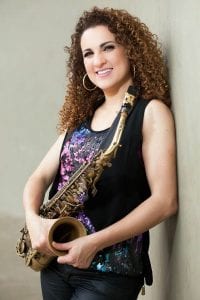 Sintia Piccin on the JodyJazz JET

"The JodyJazz JET has everything I search for in a saxophone mouthpiece. It's powerful, balanced, allows flexibility, has dynamics and huge projection when I push it. This is a mouthpiece made by a guy who plays and understands what a mouthpiece needs to work perfectly. Congratulations Jody, great job!!!"

Born into a family of musicians, Sintia began her musical studies early, in the city of São Carlos, São Paulo. At thirteen she was playing professionally. She graduated in saxophone at the Conservatory Carlos Campos de Tatuí (São Paulo / Brazil), where she also taught from 2001 to 2008, the courses saxophone, flute, Practice Group and improvisation MPB / Jazz.

Sintia has performed several works with the instrumental music group the Cambanda Jazz Combo, where she accompanied many artists such as trumpeter Daniel Barry (USA), Teco Cardoso, Monica Salmaso, Paulo Freire and Vinicius Dorin. She also played in the Orchestra Olho Dágua, Catirina Group, Raspa do Tacho Group (with whom she recorded the album “Espaço Imaginario”) and Zerró Santos Big Band Project where she had the opportunity to show her multi-instrumentista side, playing Sax Sopranino, Soprano, Alto Flute Piccolo, Flute in C, Flute in G and Pífanos.

She has worked extensively in television with the Faustão Band in 2003 (Globo) and the Band of Programa do Ratinho (sbt) from 2006 until today, where she accompanied various artists like Jair Rodrigues, Ivete Sangalo, Alceu Valença, Benito de Paula, Carlinhos Brown, Sandra Sá beyond the leading artists of the Brazilian music scene.

She has also made many recordings, including CDs Rolando Boldrin and Renato Teixeira where Sintia plays Pífanos (instrument that researched and manufactured the instrument itself), Samba á Paulista Project (TV documentary Culture), Samba de rainha group, Sinhô Group Preto Velho, Wesley Noog where she served as an instrumentalist and arranger.