What Is the SUPER JET Tenor Saxophone Mouthpiece?

The SUPER JET Tenor Metal Saxophone Mouthpiece is a modern saxophone mouthpiece. It is our brightest and loudest mouthpiece, without being obnoxious. The SUPER JET series has been developed for the Smooth Jazz, Contemporary Jazz, Rock and Funk player in mind but we are finding many Jazz players loving this mouthpiece. The Palladium-plated virgin bell brass gives the SUPER JET Tenor a crisp, clean brightness that can get very funky and dirty because the piece really vibrates due to the beak design. It’s going to give you more cutting power, more edge, more volume and more Altissimo. But like the Alto model, it is beautifully free-blowing with enough bottom in the sound to make it more versatile than many mouthpieces in this category of small chamber pieces. Super fun to play, anyone who likes plenty of volume and cutting power will love the SUPER JET Tenor. Volume – You will be amazed at how loud you can get with this mouthpiece, yet you can play sweetly without it sounding shrill.

Power and projection are derived from the small step baffle design. Brightness, edge and cut are enhanced by the Palladium-plated virgin bell brass which gives the SUPER JET a crisp clean brightness that can get very funky and dirty and due to the beak design the piece really vibrates. Like all JodyJazz mouthpieces the SUPER JET features a hand crafted baffle, thin tip rail and side rails for that instantaneous response for which JodyJazz mouthpieces are famous. 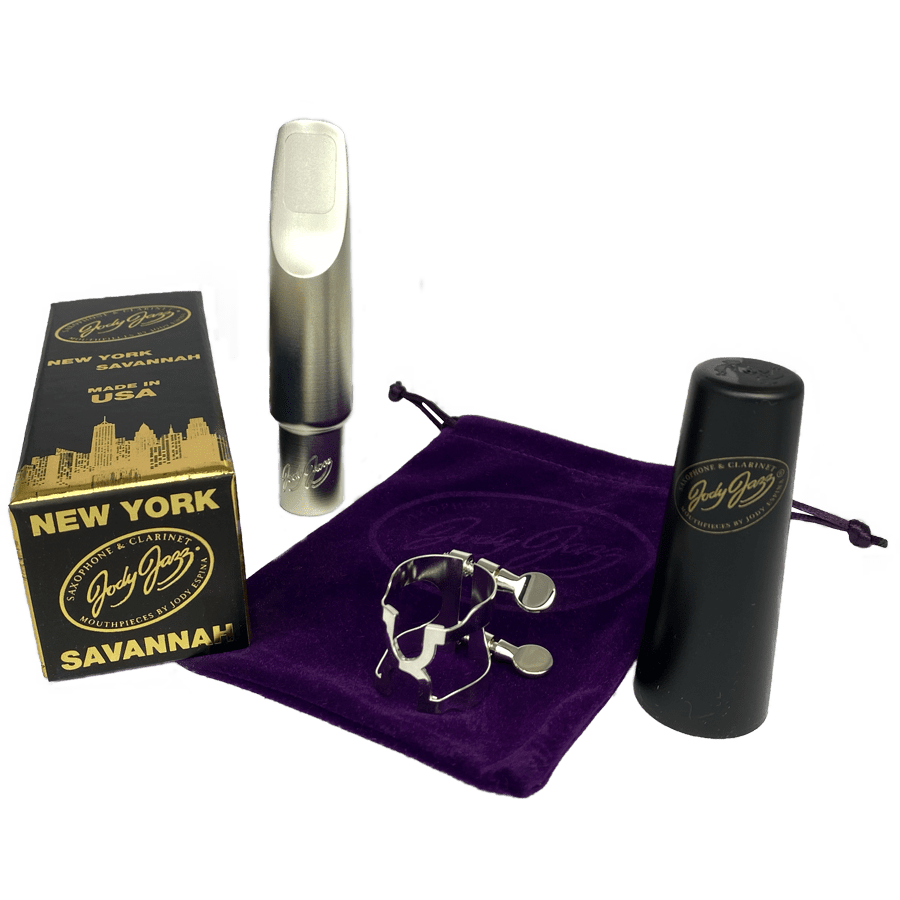 “I love my new JodyJazz Super Jet Tenor and Jet Baritone mouthpieces. Whether it be a ballad or a fu …

END_OF_DOCUMENT_TOKEN_TO_BE_REPLACED

“I can use this mouthpiece for any gig that I play. My main gig with the Count Basie Orchestra, this …

END_OF_DOCUMENT_TOKEN_TO_BE_REPLACED

When I first saw the DV Tenor 7 mouthpiece I was intrigued by its striking appearance. The sound was …

END_OF_DOCUMENT_TOKEN_TO_BE_REPLACED

Due to the shorter facing curve on the SUPER JET a softer reed than you might normally use could be appropriate. This is because the reed actually has less length in which to vibrate. This doesn't hinder playing at all, in fact it makes the SUPER JET one of the greatest Altissimo pieces of all times. Altissimo still works great with a little softer reed. These are my observations and how I like to play the SUPER JET Tenor. For example on a JodyJazz DV Tenor 7* I play a D’Addario Select Jazz 3M, and on the SUPER JET Tenor I prefer a 3S or 2H. The SUPER JET is very free blowing but I think the SUPER JET's shorter facing curve makes a difference with the reed. The main message is that anytime you are trying a new mouthpiece two things are very important: finding the right reed for the mouthpiece and making sure that while you try the mouthpiece you are in tune. Don't assume that it will go on the neck in the same place as your previous mouthpiece. I love the SUPER JET and I hope you will too. Jody Espina – President, JodyJazz

Every JodyJazz mouthpiece is hand finished to insure the absolute best quality. In addition, each mouthpiece is individually play tested by Jody Espina or one of our professional saxophonists on staff to insure a perfect seal with the reed and proper response throughout the range of the saxophone.

For the ultimate upgrade add the POWER RING® Ligature

The new POWER RING Ligature will give you greater freedom, increased harmonics, a fuller sax sound and more power!.

What Does The SUPER JET Do?

How Does The SUPER JET Do It?

Why is there a warning label on Metal Mouthpieces?
Almost all metal mouthpieces in the past and at the present time are made out of brass which can contain up to 3% lead. The lead in the brass is one of the components that give this particular brass it ’s hardness or rather it’s softness which makes it have a particularly pleasing sound to musicians. Proposition 65 from the state of California requires manufactures to label any products that have compounds in them that have been found to cause Cancer or Reproductive Harm. Lead is one of these Compounds. JodyJazz mouthpieces are electroplated with a layer of copper, then a layer of Nickel, Silver or Rhodium, and then a layer of Gold or Silver. This electroplating ensures that the raw brass is never in contact with the player.
Do you and your employees use brass mouthpieces?
This is Jody Espina and yes myself and my employees have been using JodyJazz Gold or Silver Plated brass mouthpieces for many years. My first JodyJazz brass mouthpiece was made in 2001 and I have continuously been playing JodyJazz brass mouthpieces since. I played my first metal mouthpiece in 1979 on tenor sax and have always used a brass mouthpiece on tenor sax ever since then.
Did the Jazz greats use these kind of brass mouthpieces?
Yes. Ben Webster, Coleman Hawkins Stan Getz, Sonny Rollins, Dexter Gordon, John Coltrane, Michael Brecker, Tom Scott Andy Snitzer are just a few of the 1000’s and 1000’s of players who have played brass mouthpieces.
Why did you change from Silver-plating to Palladium-plating on the SUPER JET and DV CHI models?
Palladium is one of the earth’s most durable elements. It is a member of a group of precious hard metals that also includes Platinum but is actually rarer than Platinum and considerably more expensive. Palladium is intrinsically harder than standard Sterling Silver, is highly resistant to corrosion, and will not tarnish in air. Because of these properties, Palladium is increasingly used as an alternative to Silver-plating and today is widely found in everything from high-end automobiles to expensive jewelry, and now saxophone mouthpieces.
Customer Reviews
★★★★★

Excellent mouthpieces in every way.

"Over the years from 1956 I have played several tenor and alto mouthpieces. Each change was a positive one from the Berg, Otto Link, Vandoren Jumbo Java, Rovner “Deep V and RPC. We are very fortunate that we have choices to help make our gigs more enjoyable. Several things about the JodyJazz SUPER JET Tenor 9* and SUPER JET Alto 9. No resistance from the bottom to the top register. They both just play with no effort. Jumping octaves is no issue. Excellent intonation. Volume will be very loud when needed on those gigs that you need to fill the room. Nice subtones are no problem at all. Excellent mouthpieces in every way. As with any mouthpiece change it can take a few weeks to get the feel and the right reeds. Jody’s team has made mouthpieces that are just fun to play in any style that your performance calls for from those laid back gigs to the loud Rock & Roll parties with sax attitude. They both do the job!"
-John Laughter
★★★★★

Great! - once you also find your perfect reed match.

SUPER JET Tenor 7*
"I liked the JodyJazz Super Jet Tenor 7* a lot when I bought it a few months ago …and after a few reed model trials - - I finally matched it with a Legere Studio Cut (3.0) reed, it went from really good - to GREAT! I was always a big fan of the Legere synthetic reeds and wanted to find the best match. I found it!"
-SpoonySax
★★★★★

The BEST mouthpiece on the market

SUPER JET Tenor 7*
"The SUPER JET is hands down the best mouthpiece on the market! It really does work wonders when it comes to playing in the Altissimo range, I'm hitting notes I thought I'd never be able to play. This mouthpiece has kept me practicing for hours because its just a super fun piece to play and it makes practice enjoyable!"
-Chandler Mullins
★★★★★

"I recently received my Super Jet #7 tenor mouthpiece along along with my Power Ring ligature that I ordered from JodyJazz and am I ever impressed. The SUPER JET definitely improves the sound. And it takes less effort to play altissimo as well. It really gives me that rock sound that I’m trying to achieve. And the Power Ring ligature is so much quicker to use than a standard ligature and it keeps the reed in place very well. Two great products from a first class company!"
-Kevin Bryson
★★★★★

The SUPER JET Tenor is a work of art and such a pleasure to play.

SUPER JET Tenor 8*
"I recently bought a JodyJazz Super Jet 8* mouthpiece from Cosmo Music here in Southern Ontario north of Toronto. I had been playing a Dukoff mouthpiece for many years and playing the Jody Jazz Super Jet made me realize that I should have switched to JodyJazz years ago! I had a problem though. The mouthpiece didn't seem to sit perfectly on the neck cork of my 1968 Selmer Mark VI Tenor. In order to keep my horn in tune, the Super Jet was only on the cork about 5/8 of an inch. It felt and looked unstable. I tried a few adjustments without much success so I sent off an email to JodyJazz to ask them if they had any suggestions. Danielle Walker got back to me right away to ask me where I had bought the Super Jet so I told her. She asked if I could take a photo of the Super Jet 8* and send it to her which I did, I also sent her the sales receipt from Cosmo Music where I had bought it. She let me know that the Super Jet that I had bought was an earlier model with a short shank and the current Super Jet Tenor has a longer shank. All I had to do was send her my Super Jet 8* and Jody Jazz would replace it with a new long shank Super Jet 8*. So a few weeks after I sent off my Super Jet to Jody Jazz I received a new JodyJazz Super Jet 8* Tenor mouthpiece with a longer shank. Problem solved! I cannot thank JodyJazz and Danielle Walker enough for their friendly quality service and problem-solving, it is outstanding!! And that doesn't include the quality of the mouthpiece itself. It is a work of art and such a pleasure to play. It feels like I'm cheating somehow because it has made my horn so much easier to play. Thanks so much everyone at JodyJazz!!"
-Neil Kitagawa