Owing to very significant increases in demand for the DV, DV NY and DV CHI models, we are currently experiencing an extraordinarily high level of backorders for these products. Consequently, we will not be accepting any new orders for these models until the backorders are back to a manageable level. As a result of this you might find that some JodyJazz dealers are temporarily out of stock of these models. We want to assure you that this is no fault of our dealers. We are focusing our production on reducing the backorders as quickly as possible and we expect all these models to be fully available again in just a few months time.

What is the DV CHI Tenor Saxophone Mouthpiece?

Simply put, the DV CHI combines the best properties of the highly successful DV and DV NY series while adding several new design modifications which enhance the players ability to manipulate the tone. The scalloped chamber also allows the player to push more air through the mouthpiece without experiencing any harshness.

Here, nature, science and imagination combine to create a revolutionary new saxophone mouthpiece. Jody Espina has designed the patented JodyJazz CHI, using proportions and principles found in nature. For a powerful, husky, effortless playing experience, we invite you to try the DV CHI.

END_OF_DOCUMENT_TOKEN_TO_BE_REPLACED

“Jody’s mouthpieces are so free blowing and consistent. I have not seen quality control like this in …

END_OF_DOCUMENT_TOKEN_TO_BE_REPLACED

END_OF_DOCUMENT_TOKEN_TO_BE_REPLACED
We'd love to hear your thoughts! Click here to submit your testimonial

Must hear audio clip on the DV CHI by David Beecroft 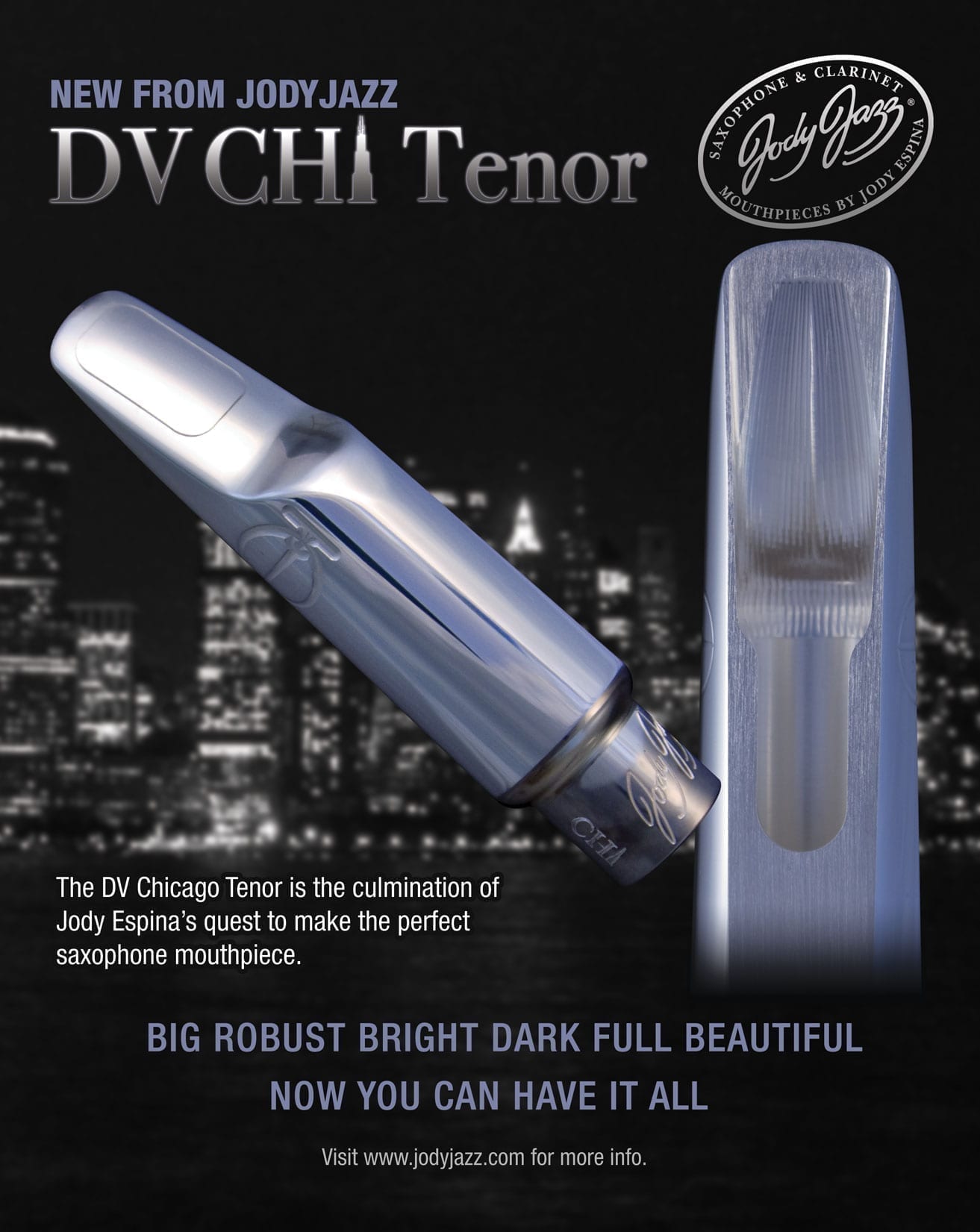 What Does The DV CHI Do?

How Does The DV CHI Do It?

Due to the free blowing nature of the DV CHI Tenor, be prepared to use a harder reed than you normally do. This may or may not be the case for you. The great benefit of this is that a harder reed lasts longer and a harder reed helps the altissimo range. For this same reason, you may want to try a slightly more open tip than normal. For example, Otto Link # 7 players, will usually play a DV CHI 7*.

Why is there a warning label on Metal Mouthpieces?
Almost all metal mouthpieces in the past and at the present time are made out of brass which can contain up to 3% lead. The lead in the brass is one of the components that give this particular brass it ’s hardness or rather it’s softness which makes it have a particularly pleasing sound to musicians. Proposition 65 from the state of California requires manufactures to label any products that have compounds in them that have been found to cause Cancer or Reproductive Harm. Lead is one of these Compounds. JodyJazz mouthpieces are electroplated with a layer of copper, then a layer of Nickel, Silver or Rhodium, and then a layer of Gold or Silver. This electroplating ensures that the raw brass is never in contact with the player.
Do you and your employees use brass mouthpieces?
This is Jody Espina and yes myself and my employees have been using JodyJazz Gold or Silver Plated brass mouthpieces for many years. My first JodyJazz brass mouthpiece was made in 2001 and I have continuously been playing JodyJazz brass mouthpieces since. I played my first metal mouthpiece in 1979 on tenor sax and have always used a brass mouthpiece on tenor sax ever since then.
Did the Jazz greats use these kind of brass mouthpieces?
Yes. Ben Webster, Coleman Hawkins Stan Getz, Sonny Rollins, Dexter Gordon, John Coltrane, Michael Brecker, Tom Scott Andy Snitzer are just a few of the 1000’s and 1000’s of players who have played brass mouthpieces.
Why did you change from Silver-plating to Palladium-plating on the SUPER JET and DV CHI models?
Palladium is one of the earth’s most durable elements. It is a member of a group of precious hard metals that also includes Platinum but is actually rarer than Platinum and considerably more expensive. Palladium is intrinsically harder than standard Sterling Silver, is highly resistant to corrosion, and will not tarnish in air. Because of these properties, Palladium is increasingly used as an alternative to Silver-plating and today is widely found in everything from high-end automobiles to expensive jewelry, and now saxophone mouthpieces.
Customer Reviews
★★★★★

Great sound, fabulously well in tune from octave to octave. .Also Power Ring is a revelation.

DV CHI Tenor 7*, POWER RING Ring Ligature
About six months ago I got one of your CHI tenor mouthpieces. After a certain amount of woodshedding with it I was very please indeed. Great sound, fabulously well in tune from octave to octave. Recently a bass player pointed out that you'd started making a ring ligature specially fitted to your mouthpieces, and he suggested I give it try. The ligature arrived a few hours ago, and it's a revelation. Not only do the lowest notes speak far easier than they ever have before, but the shrillness at the top is gone as well. The tone is consistent from top to bottom and beautiful throughout. You really should just up the price of the mouthpiece a bit and sell them with these ligatures. I don't think anybody would ever tell you it wasn't worth the money. All the best, Cork, Ireland
-Kurt Tidmore
★★★★★

I can`t beileve the tone and projection of this piece

DV CHI Tenor 7
"The DV CHI is my number 3 tenor mouthpiece purchased from Jody jazz and I couldn`t be happier, have played the DV, DVNY and now the DV CHI and I can`t beileve the tone and projection of this piece, Jody you are my best friend for life Thank you so much!! "
-Roger Salles, Frisco, Texas
★★★★★

My motivation to play now is through the roof, and, I am finding that I am really not that bad of a player after all!!!

DV CHI Tenor 7
" Jody and staff, I have been playing the DV CHI 7* for about an hour now, and you can forget the two week trial period, you are never getting this piece back!!! It's like I have a new horn and a new sound, playing with ease! I play an early 60's Strasser Marigoux that I have been battling for years, with a Dukoff D7, I thought it was me, that I just did not play enough, or the horn. The guys at the repair shop swore to me it was a sweet horn, no Mark VI or Balanced Action, but a pretty sweet horn indeed. Until now I had many doubts. The sound I am getting from the DV CHI is instantly better, all of the notes come out with ease, I used to worry when playing live that certain notes would not come out, lower register and sometimes the middle D was extremely weak. When playing jazz tunes such as "Turnaround", dropping an octave from middle D to A, it was never certain how well it would come out. The DV CHI has changed that completely, it drops clear and precise every time. Just want to thank you for creating such an amazing piece, without it, I had no motivation to play, the sound was not what I thought it should be and hitting certain notes was always a struggle. This old horn sounds amazing with your DV CHI on it and the notes seem to now come out almost to easy. I have even moved from Rico 2.5, to Rico Jazz 3M that you sent with piece, instantly, my old mouthpiece pretty much refused to move up to a stronger reed. This is incredible, my motivation to play now is through the roof, and, I am finding that I am really not that bad of a player after all!!! Thank you again, Chas "
-Chas Goodrum
★★★★★

DV CHI Tenor 7
"I got the DV CHI 7* in yesterday. I can't begin to tell you how pleased I was from the first note. I don't think I've ever played a mouthpiece that was that wonderful- you could tell that there was an incredible amount of attention to detail in the piece. There isn't a flaw in it! The first thought that came to my head was, "This is the first time I've felt so comfortable from the first note, that I could possibly take it to a gig and be totally fine, from the bottom to the top of my horn." So, I did. Took the piece out on a gig last night here in Charlotte, NC and with no issue whatsoever, I played the gig probably better than I ever have before (I've played this gig every Tuesday that I've been home since I was 14 years old). What can I say? Nothing less than incredible."
-Ryan Saranich
★★★★★

DV Alto 7, DV CHI Tenor 7*
"Hello Jody, I wanted to once again express my appreciation for the new JJ DV CHI 7*. I've been playing a DV 7* Tenor and a DV 7 alto piece for years, and simply put, they are the best mouthpieces I've played in my over 30 years. I absolutely love these pieces. Seriously, I've owned them all and I've never played anything like the DV series. What I particularly appreciate is the effortless response and huge rich sound that comes out of these pieces. I'm always receiving wonderful comments about my sound. With the DV CHI, you nailed it again. The first time I tried this piece, I stood speechless. The sound of the DV CHI simply put is "amazing." Effortless and soooo comfortable as usual, with a big, rich, deep sound (not too bright; not too dark) with incredible projection and a wonderful resonance and yet a nice smoothness to the sound. No shrillness whatsoever. Seriously this piece will cover all genre's from mainstream jazz to blues to R&B, etc. The workmanship is second to none, tips and rails are absolute perfection and I'm giddy for having had the opportunity to get one so early. I've owned so many pieces over the years and this has got to be the best I've ever played. I�m not sure it can get any better. Thank you so much again for your kindness and time. I'm having a blast with the DV CHI. I truly believe you are the premier maker of exquisitely crafted saxophone mouthpieces and I'm so pleased to be turning several players on to your pieces. Very best regards,"
-Randy Montau, Los Angeles, CA